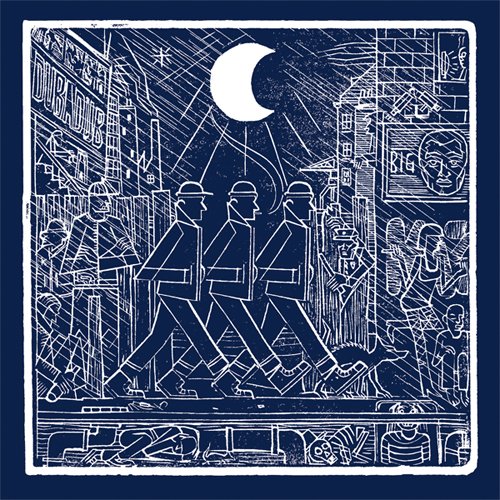 With „Midnight Walkers“ Stand High Patrol combines influences from the jamaican soundsystem culture and reggae with dub and hip-hop elements.  Right in the first seconds of the album, you can hear whats it all about, smooth dub sounds, a reggae/raggamuffin vibe and lyrics with jamaican slang. You can seperate the album in two parts. The first part is slower, has more emphasize on the lyrics and feels more  like and experimental hip-hop recorded, with „Entertainer“ and „Midnight Walkers“ being the exceptions by having a lot of dancehall elements, feeling more made for dancing and emphasizing a lot less in lyrics. „A big tree“ is the hit song of the album and stands in the middle of the album. Whilst being pretty slow, compared to the rest of the album, it has the Raggae vibe, in a funky, jazzy package, fantasitic piano and highptiched electronic sounds for an unearthy feel, the lyrics are by far the catchiest on the album, slowly building suppension for the rest of the album. The second part starts with the last hiphop heavy track in „home made“, where we get a 90s Gangsterrap style beat, even though it stilhas the raggae and dub elements. After that weh ave 4 heavy dub songs, all 4 resemble the Jamaican soundsystem really well, have clearer dub sound then the rest of the album and are basically perfect for every dub dance playlist. Overall this album works really well as a complete piece and still no song feels like a filler. Even though their is a lot of experimental sounds, we get a stylistic fitting, catchy and movement inducing masterpiece from the brittany.